WCSHOF dusts off artifacts, seeks them 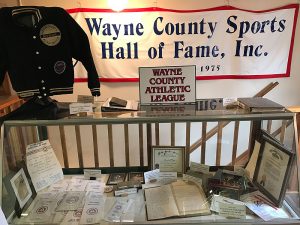 WOOSTER — The Wayne County Sports Hall of Fame museum opened in 2003 with a memorable ribbon-cutting ceremony.

A who’s who of local dignitaries were on hand for the event, including late Wayne County Sports Hall of Fame members Roy Bates and Ed Arn; former WCSHOF trustee and state representative Jim Carmichael, who passed away in 2016; and legendary former Wooster High, Ohio State and Cleveland Browns standout Dick Schafrath.

Time flies as the saying goes and the current WCSHOF trustees have made it a priority to update the museum and do a better job of promoting it. They’re working toward a grand re-opening on the museum, which is a part of the Wayne County Historical Society, 546 E. Bowman St.

“We already have a fairly good representation of items that recognize some of the greatest coaches, players and teams from the county,” said Souers. “At the same time, we realize there are so many more items out there and so many more stories to be told. We greatly appreciate the Wayne County Historical Society for allowing our museum to be included on their campus.”

The WCSHOF museum is located above the old-time general store on the campus of the Wayne County Historical Society. The WCSHOF museum can be viewed during guided tours that are given on Fridays and Saturdays from 1-4 p.m., or by special appointment by calling 330-264-8856.

WCSHOF trustee Bill McMillan (2004 inductee), a retired Orrville football coach and former athlete at Wooster High and The College of Wooster, also serves on the WC Historical Society board. He has been instrumental in leading the efforts to update the sports museum.

Although the museum got off to a grand start with lots of donations and publicity in the mid-2000s, the current trustees believe it’s in need of updates. Especially lacking is memorabilia from the last 10 years.

Of course, older items are also needed and appreciated.

Examples of memorabilia the WCSHOF is seeking are uniforms, equipment, pictures, letter jackets, scrapbooks, programs, pennants and plaques. The more successful the athletes or teams, the more the trustees would like to see them recognized in the museum.

The museum contains items from well-known sports performers such as Bob Knight, Dean Chance and Schafrath and College of Wooster performers.

There are also items donated from typical high school athletes, like football, basketball and baseball players or cheerleaders. All tell a story, though.

“Wayne County has a really rich tradition for athletics and the museum is a great way to highlight some of the many great people who have been a part of it,” McMillan said. “Anything that someone could donate would be appreciated.”

By AARON DORKSEN Special to the Daily Record