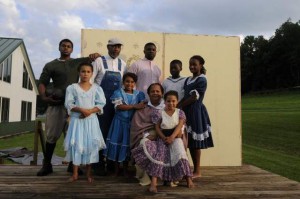 The story of Charles Follis, the first black professional football player, will be presented at Malabar Farm State Park August 9, 11, 16 and 18, with a film crew from the NFL filming there on opening night.

The original play, written by local resident and performer Jim Stoner, highlights the career of Follis, a local football legend.

“I was contacted by the NFL film crew about the play. They want to interview the cast and film the show to air during their weekly NFL Film Presents,” Stoner said.

“Now Charles Follis will get the national attention he was due,” he said.

Stoner, an avid student of history and drama, stumbled on a book when he was a teenager that chronicled the history of professional football. At the time, he was involved with backyard football enthusiasts; he maintains that connection today.

With the historical knowledge he acquired over the years, Stoner continued his interest in arts and music, staying involved throughout his high school and college years.

Stoner, who was raised in Rushsylvania, Ohio, became fascinated with the fact the NFL was born near him, in central and northern Ohio.

“Mike Petee and Mark Sebastian Jordan are friends of mine. I’ve participated in each of their shows and saw how well they wrote their plays and then staged them. Three or four years ago, they inspired me to finish my work. I got serious in 2011, did the editing in 2012 and finished the story in 2013,” said Stoner; a director, writer and actor.

Stoner is also working on a screenplay of “The Black Cyclone.”

In his lifetime, Follis’ professionalism was reported by the local media, but his role as the first black professional football player wasn’t known until 1975.

“Follis was rediscovered when researchers were looking at old pages of the Shelby Globe in the Shelby Museum,” Stoner said. A story in one edition announced that Follis had signed a contract for the upcoming season.

Charles Follis was born in Cloverdale, Va., in 1879 and moved to Wooster with his parents when he was a young boy. Follis and his two brothers played football for Wooster High School, where Follis, one of seven children, helped organize the first varsity football team. He played right halfback and was the team captain for a team that had no losses that year.

Entering Wooster College in 1901, Follis opted to play football for the amateur Wooster Athletic Association instead of the college squad.

While a member of the Wooster Athletic Association, he earned the nickname, “The Black Cyclone from Wooster.”

In 1902 and 1903, Follis played for the Shelby Blues, having been recruited by Frank Shiffer of Shelby, who wanted Follis to play with them, not against them. He thus became the first African-American professional football player.

Follis also was the first black catcher to go from college ball into the Negro Leagues.

In 1901 and 1902, his teammate was Branch Rickey, who later became the general manager of the Brooklyn Dodgers and Pittsburgh Pirates.

Follis died in 1910. He is buried in Wooster Cemetery.

“The Black Cyclone” is set in Ohio in 1902. With the shadow of the Civil War, civil rights were merely a volatile talking point.

With a bit of prosperity growing in small towns, new forms of entertainment became popular, including field football clubs.

“The Black Cyclone” is the story of one family’s strength and how tit fought to make a home in white America against the backdrop of what is now known as the NFL.

Amy Stoner, of MadCap Productions, is the stage manager.

The outdoor event will be held regardless of the weather. If it rains, the production will be held in the big barn at Malabar.

The picnic meal, provided by Port-A-Cook, includes a barbecued pulled pork or chicken sandwich, American potato salad, baked beans, chips, watermelon, lemonade or unsweetened iced tea. Picnic tables will be available. Desserts, drinks and snacks will be on sale before the show and during intermission.

“We are excited to offer this inspiring story of Mr. Charles Follis at Malabar Farm,” said Victoria Cochran, coordinator of special events for the Malabar Farm Foundation. “The play has something for everyone. There is the football and sports interest, historical perspectives and the social attitudes and issues of the times. These themes all run through the prevailing message of a strong character and his interactions with the changing world about him. All this and dinner are presented on the grounds of Malabar Farm in our beautiful Pleasant Valley.”

The price for the outdoor drama is $30 for lawn seats and it’s “bring your own blanket.” Available seating is $34.

For the Sunday shows, it’s $20 for “bring your own blanket” seating and $24 for available seating.

Please provide information about Malabar Farm and the upcoming play dates
And method to purchase tickets.