Front Row Seat: Schafrath back in spotlight one more time 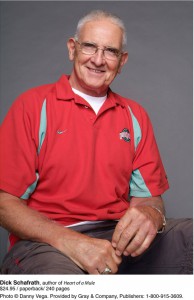 When Dick Schafrath was a standout offensive tackle with the Cleveland Browns, he used to drive his Volkswagen Beetle to practice. Receiver Gary Collins rode with him. Both lived in Aurora.

The journey was sometimes treacherous in the winter. Schafrath said his car had no heater or defroster. When it snowed, one of them had to roll down the window, hang their head outside and try to scrape the ice off the windshield.

Schafrath’s ride on April 26 to the Radio City Music Hall in New York was presumably a bit easier. The NFL allows some of its stars of yesteryear to announce draft choices made by their former team, and this year Schafrath was picked. He announced that the Browns had selected cornerback Leon McFadden of San Diego State in the third round.

A year ago, Collins announced one of the Browns’ draft choices.

Schafrath was one of my favorite players when I was growing up.

In the late 1960s, the license plate on my dad’s car had a “77” and a “16” on it. Those numbers were easy for my family to remember because Schafrath (No. 77) and quarterback Bill Nelsen (No. 16) were usually the first two players to rush downfield and congratulate the Browns player who had scored a touchdown.

I had a chance to interview Schafrath a few times, and I got his autograph a couple of times. He was always a good guy.

At OSU, Schafrath played on both the offensive and defensive lines and was a Buckeyes’ team captain in 1958. The Browns drafted him in 1959 in the second round.

Coach Paul Brown didn’t think Schafrath was big enough to make the team, so at a weigh-in Schafrath wore a 20-pound iron jock strap that was held in place by suspenders, pushing his weight up to 235 pounds.

At first, Brown was surprised at how much Schafrath weighed, then he discovered the added weight. Schafrath said Brown smiled and told him that anybody who went to those lengths to make the team deserved a chance.

Schafrath made the most of that chance. He played 13 seasons with the Browns and was selected to six Pro Bowls. Schafrath and Hall of Fame guard Gene Hickerson were key blockers for three Hall of Fame running backs — Jim Brown, Bobby Mitchell and Leroy Kelly.

As left tackle, Schafrath protected the blind side for quarterbacks Frank Ryan and Nelsen.

In the 1964 NFL title game, the Browns flattened the Baltimore Colts, 27-0, at Cleveland Stadium. Schafrath and the rest of the offensive line — Hickerson, John Wooten, Monte Clark and John Morrow — provided near flawless protection for Ryan. I have an autographed photo of all five of them together — the most famous offensive line in Cleveland football history.

The offensive line also opened up holes that day for Jim Brown, the greatest football player of all-time.

SCHAFRATH recalled that the night before the championship game, he went to a theater in downtown Cleveland to watch a movie and take his mind off the upcoming encounter.

By a remarkable coincidence, he unknowingly sat down next to Colts’ defensive end Ordell Braase — the man he was assigned to block the next afternoon. Horrified, Schafrath quickly got up and moved to a different seat.

Because of his strong work ethic and occasional stubborn determination, friends and teammates nicknamed him “The Mule.” When Schafrath’s autobiography was published in 2006, it was titled “Heart of a Mule.”

He was selected to the Browns Legends Club in 2003.

After he retired from football, Wooster native Schafrath bought the Loudonville Canoe Livery in 1973. He and his family owned and operated it for 24 years.

Schafrath is also known for his numerous stunts, including wrestling a bear, canoeing nearly 80 miles across Lake Erie without stopping and running 62 miles from Cleveland Stadium to the Wooster High / College of Wooster stadium.

Whether on or off the football field, it seemed his life was rarely dull.