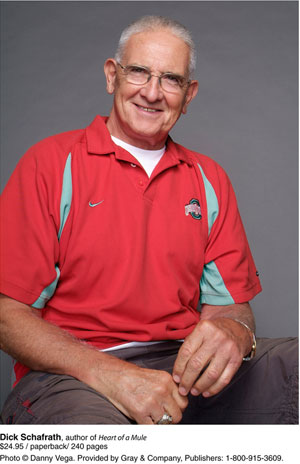 WOOSTER – Dick Schafrath has worn so many different hats in his lifetime it almost doesn’t seem possible the same person could have done it all. Fittingly, his just released autobiography “Heart of a Mule” is subtitled “The Dick Schafrath Stories,” with the word “Story” crossed out in favor of the plural.

The 70-year-old Schafrath will be at the Buckeye Book Fair on Saturday at the OARDC to promote the “Heart of a Mule” ($24.95 hard cover), which was published by Gray & Co. of Cleveland. Schafrath fits a lifetime worth of adventures into the book, starting with his early family days growing up on a farm in Wooster and continuing through a decorated football career.

He played for Wooster High and then on championship teams for Ohio State and the Cleveland Browns. After Schafrath’s playing days were over he bought a canoe livery in Loudonville and became a four-term Ohio senator. Just this past year he actually finished up the college degree at Ohio State University he’d put off for five decades.

Mixed in throughout Schafrath’s inspiring life have been a series of larger than life stunts, some already well known and some brought to life in his book. Schafrath once rowed a canoe across Lake Erie, in another instance jogged from Cleveland to Wooster on a bet and even wrestled a bear.

To introduce this part man, part folk hero, there are not one but two forewords, written by former Browns MVP Jim Brown and current Buckeyes coach Jim Tressel. For people familiar with Schafrath’s exploits, there’s still a lot more to learn about him in the book. Schafrath uses a simple, witty writing style that makes it seem like he’s right in the room talking to the reader. Any fan of the Buckeyes or Browns should enjoy hearing the standout former offensive lineman’s behind-the-scenes stories on the likes of Woody Hayes, Paul Brown and Jim Brown. There are actual letters from Hayes included. However, it’s even more recommended for people in this area because of the many stories relating to Wayne County. The first 52 out of 228 pages are dedicated to Schafrath’s birth until he left for Ohio State.

Some of the funniest lines come in this section, where there are several laugh-out-loud moments. Schafrath, one of seven children, recalled how other people didn’t always appreciate his humor. Wanting to be a smart-aleck when his dad asked a young Schafrath to give a prayer before dinner, he recalled saying,

“Name of the Father, Son and Holy Ghost, the one who eats the fastest gets the most.” “WHAM! I thought my head was coming off,” Schafrath wrote next, of his dad’s reaction. Although there were several other funny pranks mentioned, including at Saint Mary’s School in Wooster, Schafrath also recalled developing the stubborn work ethic that led Jim Brown to later nickname him “Mule.” Schafrath also recollected appreciating the first modern plumbing he encountered at Wooster High School.

“I’d never had a shower before I played football,” Schafrath wrote, having previously explained baths on the farm were taken in a tub the family waited in line for. “I loved that hot shower. So I went out for basketball, track and baseball. And my dad could never understand why I loved sports.”

Another reason he liked sports so much was they were a lot easier than working on the farm. Schafrath also tells stories of many people who will be familiar to area residents, including Roy Bates, Bobby Knight, Dean Chance, Gene Coleman and Cy Morgan. The behind-the-scenes tales from days playing for the Buckeyes and Browns also are intriguing, as is the chapter on how he got into politics. Of special significance are anecdotes from the title teams he was on at OSU in 1957 and Cleveland in 1964. The book winds down with a chapter titled “Adventures with family and friends.”

“The most fun I ever had was with my family,” Schafrath said. Schafrath finally may have taken a timeout to write his “stories,” but he says there’s still a lot left he wants to do. “God and I are working on my latest challenge: To be the oldest Ohioan ever to have lived,” he wrote. “The stumbling block between us is still how much God will slow down my aging process. Only time will tell.” One thing’s for certain: God certainly broke the mold after Dick Schafrath came along. “Heart of a Mule” lets people read all about it.