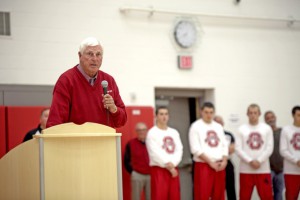 ORRVILLE — No matter where Bob Knight travelled in climbing to the top of the basketball world, he never forgot his roots in Orrville.

From coaching three NCAA championship teams at Indiana, to leading the 1984 USA team to an Olympic gold medal, to holding the all-time Div. I record for coaching wins at the time of his retirement in 2008, Knight stayed close with hometown friends and supported the Red Riders at his alma mater.

Orrville showed its admiration and appreciation for the coach nicknamed “The General” Saturday night. The 1958 Orrville graduate was on hand as Bob Knight Gymnasium was dedicated in his name between games of a basketball doubleheader, which the Orrville girls won 70-31 over Northwest and the boys lost 41-40 against Coventry.

“This is a tremendous honor for me — the fact that I get to share this with Steve Smith and that it comes from my hometown,” said the 73-year-old Knight, as he addressed the sellout crowd at halfcourt between games in the sparkling new 1,250-seat gym.

Orrville will recognize the winningest man to ever coach the Red Riders at its next home game against Wooster on Dec. 13 when Steve Smith Court will be dedicated. The late “Smitty” coached the Orrville boys to three state titles (1992, ’95, ’96) and 456 wins over 25 seasons.

“I have always been very proud of having gone to school and then getting to play here,” an emotional Knight told the crowd. “I hope that some of the things that I have done over the years have been

reflections of my having been brought up in one of the greatest towns in the United States.

More than a dozen former classmates were on hand to help honor Knight, including former teammates Bill and Bob Shonk, Ron Birkbeck, Warner Harper and Earl Maag. Retired OHSAA commissioner Clair Muscaro was also among those in attendance.

Knight called Harper “the greatest athlete in Orrville history” and thanked Bob Shonk for giving him his first basketball lesson while they were in middle school: “Stay between your man and the basket.”

“If there was one word I could use to describe Bob it would be ‘loyalty,’ and there are a lot of others from Orrville who I know feel the same way,” said Bob Shonk, a 1956 OHS graduate, who’s the ticket manager for the school. “He still has many, many friends in the community and he’s always done a great deal for Orrville — a lot of things most people don’t even know about.”

Ritchie said the school is, “truly blessed to have someone like Coach Knight still take such a special interest in our school and community.”

Knight provided color commentary on a college basketball game in New York City Friday night and then flew into Ohio for the special ceremony Saturday. He was accompanied by his wife, Karen, and sat with longtime friend Doc Rhoads for most of the doubleheader. He took time to talk with well-wishers throughout the night and sign autographs.

Athletic director Kent Smith said Knight inquired about making a donation to the Orrville library. He’s already dedicated his time and money for countless other projects at the school over the years.

However, as Knight spoke to a crowd that seemed to hang on his every word, it was clear he feels like he’s gotten more in return from his hometown through the years.

“I’ve always been very proud for having lived in Orrville, for having gone to Orrville High School,” Knight told the crowd in closing. “Nobody who’s ever been a citizen of this town has been prouder to be a citizen than I have.”