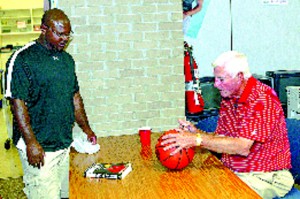 Orrville Basketball Coach Sly Slaughter gets a basketball signed by coach Bobby Knight at ‘A Night with Knight’ Sunday evening. “It’s great that the community gets to hear stories from Bobby Knight, we appreciate all he does for the high school and community,” Slaughter said of the event.

ORRVILLE — A flood of memories returned to Bobby Knight early Sunday evening when he entered the Orrville High School Gym where he once starred.

The star of “A Night with Knight” was so anxious to start reminiscing that he interrupted a brief introduction that Orrville Boys and Girls Club director Kevin Platz had started and asked for the mic.

“Let’s get to the heart of this thing,” said Knight, who was greeted by laughter and loud applause from the audience of more than 850 people. Many of the people on hand personally knew college basketball’s all-time winningest Div. I-A coach and former Orrville and Ohio State player.

Knight, who will turn 70 on Oct. 25, proceeded to share stories ranging from his days as a youth growing up on Washington Boulevard, to his current gig as an ESPN basketball commentator. He had the audience laughing much of the night, but also got across serious messages about the importance of things like knowing how to be a team player, reading and kids listening to their parents.

All the stories kept coming back to Orrville, though, for which Knight’s entirely volunteer appearance raised $25,000 for the city’s Boys & Girls Club.

“I have a tremendous feeling for this community and school and what they both did for me,” Knight told the audience. “This is where it all started. … Thank you. Sixty years ago I learned the game of basketball here and I have thoroughly enjoyed it since.”

Knight, who won a record 902 games combined as coach for Army, Indiana and Texas Tech from 1965-2008, jumped right into his highly anticipated homecoming by pointing out to the basketball floor in front of him.

The coach told the story of a close game the Red Riders won against Loudonville when he played on the same court back in the late 1950s.

“Loudonville had a guy named Tom Dennison, who I’m telling you was an absolute pain in the (butt),” Knight said. “After we won, I remember him lying on this floor at the top of the key crying. The whole image flooded back into my mind when I walked out here tonight. I’m telling you, it was great.”

Then, Knight delivered a punch line to the story, which had the crowd roaring: “The only thing that would have been better is if it had been someone from Wooster crying.”

Knight added, “It pleases me to no end that Orrville has had an outstanding record against Wooster in the last 15-20 years.

Next up for Knight was a series of thank yous and tales about the many people from Orrville who helped shape his life.

“Bob Shonk, who was a great athlete, was the first person to teach me something about basketball,” Knight said. “He grabbed me by the shoulder when I was on defense, spun me around, and said, ‘Always stay between your man and the basket.’

“That’s something I’ve told all my teams since, although in the heat of battle I’ve probably added a few other words to it over the years.” 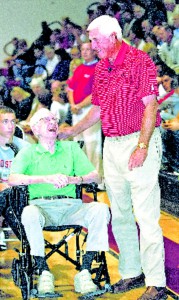 Bobby Knight (right) takes some time prior to his lecture to speak with audience member Harvey Linder. Knight credits Linder with getting him interested in fastpitch softb

Other than his own parents, perhaps no other man influenced Knight more than the man who he invited up onto the stage: Dave Knight, who was Orrville’s principal and an assistant football coach.

Although the two are not related, Dave Knight said he often claimed Bobby Knight as one of his own. Other times, Dave made sure people knew they weren’t related, he said, drawing a laugh as he alluded to some of Knight’s controversial coaching moments.

Among others in the audience Knight singled out were Warner Harper, who he called “Orrville’s greatest athlete ever,” and Harvey Linder, who was part of a big family that served in the military and also got Knight into fastpitch softball.

“I get more fun out of (critiquing) the referees (from press row) than I did winning national championships,” Knight said. “I told one official he better call walking beforehand and when he did during the game he ran by and gave me both thumbs up.”

Knight concluded the evening by having Platz come back onto the stage and read some questions from the audience, which brought about the non-revelation that the coach did not take part in the age-old Orrville prank of “painting the bridge.”

Orrville alum and longtime athletic director Kent Smith said Knight has made many returns to Orrville, but this was the first public event of its kind he can recall.

“Coach Knight has always been great to Orrville,” Smith said. “He paid for the bleachers in the gym, donated to the library, often returns to visit friends, has spoken at our hall of fame banquets and one year even went unannounced up into the football bleachers and sat with the students.”

Platz said “A Night with Knight” was the coach’s idea.

“It’s an honor and a privilege that he wanted to come back to talk and help us raise money,” said Platz, who was a good sport about being cut off in the opening. “I was a little nervous standing up on stage with such a legend, but it was fun.”

Knight wrapped up his talk by walking out on the basketball court and kneeling down. He pointed to the exact spot where Dennison laid crying all those years ago.

“That’s still a great memory,” said Knight, nodding his head in approval with a giant smile.

And those in attendance aren’t likely to forget the day Bobby Knight returned to his roots. The coach left many almost crying themselves with laughter, impressed with his loyalty and proud to call him an Orrvillite.