Dean Chance holds the 1964 Cy Young Award he won for the Los Angeles Angels in a 2004 photo taken on his family farm in New Pittsburg, Ohio. Chance is best known for being perhaps the greatest high school pitcher ever and for winning the 1964 Cy Young Award. He’s also been a carny showman. (AP Photo/Wooster Daily Record, Aaron Dorksen)

For most people, that’s enough. But he’s also been a farm kid, playboy, card sharp, carny showman and a boxing administrator. Pushing 71 years old, the former two-time 20-game winner is still bringing the heat. His No. 1 gift might be telling stories.

He has an anecdote for every thread of his colorful, adventurous life, some built around or mentioning the iconic names of another time: Marilyn Monroe, Frank Sinatra, Dean Martin, Howard Cosell, Eddie Fisher, Joe DiMaggio, Walt Disney, Gene Autry and Muhammad Ali.

It’s a sunny spring day and Chance is asked about a picture hanging among maybe a hundred others in the ranch-style farm house his parents built a few miles outside of the leafy college town of Wooster, Ohio. There is Chance, in his early 20s, and his best buddy, part-time pitcher and full-time party animal Bo Belinsky, flanking none other than J. Edgar Hoover.

“We’re in the dugout in Washington, D.C., in 1962 and (Los Angeles Angels manager Bill) Rigney says, ‘Listen, there’s a guy here from the FBI. You guys are to be at the FBI office at 9 o’clock tomorrow,” Chance said. “(Bo and I) looked at each other and said, ‘What the hell did we do?'”

The next morning they show up at FBI headquarters and are ushered into Hoover’s office, where their unlikely meeting is caught for eternity on film, predating Elvis and Nixon.

“Hoover had this guy take us down to the shooting range,” Chance said, quickly allowing the story to wriggle off in another direction. “I started the ’68 season and that was the year Martin Luther King got killed and they had tanks in Washington. I pitched the Presidential (Senators’) opener. I almost threw a no-hitter. I beat Camilo Pascual 2-0 on a one- or two-hitter (actually a four-hitter). And I gave the game ball to Mr. Hoover.”

Chance is asked about his health. He counters with another memory.

“In 1962, we’re playing a game in Dodger Stadium on June 1. They put up on the big scoreboard, ‘Today a special happy birthday!'” he said. “I was thinking it was mine. But who was it? Marilyn Monroe. The only time I ever met her.”

In the days long before kids with rocket arms were heralded, Chance staked a claim to being the best high school pitcher of all time. He still holds Ohio records for wins (52), winning percentage (just one career loss), consecutive wins (32), no-hitters in a season (eight) and in a career (17). He used to show up at youth games in bib overalls, long before he led West Salem Northwestern High School to the 1959 state baseball title and started on the 1958 team that won the state basketball championship.

The old trophies still hold an honored place in the high school, which has moved into a different building since Chance attended. The inscriptions don’t mention that Chance threw every tournament game for the Huskies, including the 7-0 win over Spencerville in the final.

No wonder major league teams clamored for his signature. He wanted to play for the Cleveland Indians, about 50 miles away. But the Baltimore Orioles offered $30,000 — considerably more than the Indians and all other suitors — and snagged the 6-foot-4 right-hander on the day after his high-school graduation.

The American League expanded soon after and the Angels picked Chance in the expansion draft.

A year later, however, Chance made sure he didn’t need much help. He tossed 11 shutouts with a 1.65 ERA in almost 278 1-3 innings. In the days before separate honors in each league, he was a clear choice as the Cy Young Award winner with a 20-9 record.

“At one time, during my career, I thought he was the best pitcher in major-league baseball,” says Denny McLain, the last major-leaguer to win 30 games, when he went 31-6 with the Detroit Tigers in 1968. “He had great stuff — the guy had absolutely as good a stuff as there ever was. Of course, he played with every horrible baseball team in America. Had he played with our club in the ’60s, listen, if he gets on a run like I did in ’68, he could have won 30. That’s how good he was.”

He thrived despite never getting many runs. Only four pitchers in major league history have ever won more than Chance’s 13 complete-game, 1-0 victories, according to STATS, LLC.

Chance and Belinsky were the toast of Hollywood. Some say Chance could have been even better had he not been playing poker or partying (although he did not drink alcohol) with Belinsky, who tossed a no-hitter in ’62 but was far better known for his exploits off the field.

Belinsky’s star burnt out early and he was dealt after the ’64 season. Chance remained a solid starter, winning 27 games the next two years before being dealt to Minnesota where he went 20-14 in 1967. After throwing almost 292 innings while going 16-16 in 1968, the wear and tear finally got to Chance’s arm and back. He retired following short tenures with the New York Mets, Cleveland and Detroit.

After getting out of baseball, he worked for years running a sideshow where rubes paid their hard-earned money at fairs and festivals to knock down milk bottles. Then he got into managing boxers.

Chance was married for 10 years. His son, Brett, is the entertainment director for the Ohio State Fair.

“The carnival, the games at the fairs. And a boxing promoter. He’s never been in your typical 9 to 5 job working for somebody else,” Brett said with a laugh. “He’s pretty much been his own boss and never had your typical workaday thing, really.”

Chance was with heavyweight contender Earnie Shavers when Shavers took on the titans of the ring. Shavers knocked out Ken Norton in the first round in Las Vegas in ’79, went toe-to-toe with Larry Holmes at Caesar’s Palace in ’78 and landed some haymakers before losing a unanimous decision to Ali at Madison Square Garden in 1977.

“Ali said, ‘That Shavers hit me so damn hard that my kinfolk felt it back in Africa,'” Chance said with a laugh.

Chance is still in the fight game, as the founder and president of the International Boxing Association. He’ll be ringside on Friday night at Nationwide Arena in Columbus for a six-bout card that includes undefeated Mark Salser taking on Rodolfo Armenta for the IBA super lightweight crown.

He still stays in touch with old friends and teammates. His baseball pension and the rent from several surrounding farms and apartments he owns cover his bills.

He lived with and took care of his mother, Florence, before she passed away in February. There’s a large tin can on the kitchen table for the fan mail that he still gets. Just last summer, he threw out the opening pitch to help commemorate the 50th anniversary of Angels baseball.

Brett was 2 when his parents divorced in 1964. Even though he didn’t live with his father, except during the summers on the family farm, he still is proud of what his dad accomplished.

“It’s pretty wild. Back in the day, and I was too young to appreciate it, but you’ve got a farm boy who makes good. The next thing you know, he’s out in L.A. mingling with the stars and everything,” he said. “He certainly has lived an interesting and a varied life, that’s for sure.”

Chance doesn’t get introspective. Ask him if he has regrets, if he’d change anything and he hesitates.

Then he begins to tell a story about sitting next to Sinatra at a dinner party at the Coconut Grove to cheer up Eddie Fisher after he was dumped by Liz Taylor. 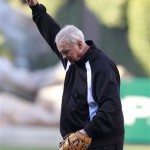 In this June 4, 2011 file photo, former Los Angeles Angels’ pitcher Dean Chance throws out the ceremonial first pitch before a baseball game between the Angels and the New York Yankees in Anaheim Calif. Chance is best known for being perhaps the greatest high school pitcher ever and for winning the 1964 Cy Young Award. He’s also been a carny showman. (AP Photo/Christine Cotter, File) 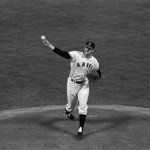 This June 12,1966 file photo shows California Angels pitcher Dean Chance in action. Chance is best known for being perhaps the greatest high school pitcher ever and for winning the 1964 Cy Young Award. He’s also been a carny showman.