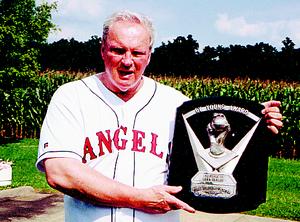 NEW PITTSBURG – Forty years ago the best pitcher anywhere in baseball was from a small farm town in Wayne County.

Dean Chance, a Northwestern High School graduate, reached the top of the baseball ladder for the Los Angeles Angels when he won the 1964 Cy Young Award at just 23-years-old. The righthander had one of the best seasons in baseball history that year despite pitching for a recent expansion team that finished with an 82-80 record. Chance went 20-9 and led the American League in wins, ERA (1.65), shutouts (11), complete games (15) and innings pitched (278), while ranking third in strikeouts (207) and walking just 86. Five of those shutouts came in 1-0 wins, tying the major league record.

To this day Chance ranks third all-time in career 1-0 wins with 15, trailing only Walter Johnson (38) and Grover Cleveland Alexander (16). Although subsequent injuries and playing on poor teams limited Chance to a 128-115 career record in 11 big-league seasons, he will always be remembered for that one spectacular season. On the 40th anniversary of winning the Cy Young, still the only one in Angels’ history, Chance sat down recently to reminisce about the magical summer and how it’s kept impacting his life since.

“It meant everything to win the Cy Young Award,” said Chance, 63, who lives in New Pittsburg with his mother, Florence, on a farm not far from where he grew up. “It’s like the Heisman Trophy in football. “It’s an award that sticks with you forever. Even though it happened 40 years ago, people still bring it up to me all the time.”

Start of something big Chance was a legendary high school athlete while playing for the Huskies. He led the basketball team to the 1958 Class A state title and pitched the baseball squad to the 1959 baseball championship in the same division. After going 51-1 with 18 no-hitters under coach Roy Bates, who passed away earlier this month at the age of 88, Chance was signed by the Baltimore Orioles for $30,000 in 1959. There was no draft then, and the Birds got him by outbidding the Cleveland Indians. Despite pitching well for the Orioles’ minor league system, Chance was not one of the 25 players that Baltimore chose to protect for the 1961 expansion draft and he was snatched up by the Angels.

Chance reached the majors later that year and went 0-2, followed by campaigns of 14-10 and 13-18 before he just about took over baseball in 1964. Chance to be the best As good as Chance was in 1964, he was only 5-5 at the All-Star break. However, a 2.19 ERA helped the righty get chosen as the AL’s starting pitcher for the mid-summer classic and he logged three scoreless innings. Chance never lost his momentum in winning 15 of 19 decisions during one of the best second halves in baseball history. He went on to beat out the likes of Sandy Koufax, Juan Marichal and Bob Gibson back when only one Cy Young Award was given out for both leagues.

“I had a blister early in the season on my pitching hand, which was why I started out in relief,” said Chance, who was the youngest Cy Young winner at the time. “I could only pitch for an inning or two before it broke open. “Once I was able to get back into the rotation things just started to click. Right before the All-Star break I had just pitched 14 scoreless innings in a no-decision against the Yankees that we lost in the 15th. The managers talked and Al Lopez of the White Sox picked me to start the All-Star Game.”

Chance blanked the White Sox and Tigers 1-0 to start the second half and that sent him on his way to nine straight wins. Former teammate Rick Reichard, an outfielder, recalled in a phone interview from his home in Gainesville, Fla., what it was like to watch Chance pitch. “He had a real twisting motion, he’d look toward second and then whip back around,” said Reichard, who was a rookie for the Angels during the second half of the 1964 season and later played against Chance. “He had an excellent fastball that really moved and he wasn’t afraid to come inside. “He also had a great breaking ball, but with that motion you just couldn’t trust him that he wasn’t going to put one in your ear. … He took me under his wing and showed me the ropes, both on and off the field. He’s still a friend to this day.”

Reichard was in the lineup when Chance earned his 20th win by beating Jim Kaat and the Minnesota Twins on Sept. 25, 1964. Chance struck out eight as he won a 2-1, complete-game decision in Los Angeles’ Dodger Stadium, which the two teams shared until Anaheim Stadium opened in 1965. Like most of the games Chance played in his career, he remembers exact details of the 20th win right down to how he retired the final out.

“I remember big Don Mincher came up and I got ahead of him 0-2 and then wasted two sliders away,” Chance said. “Then I threw him a sinking fastball that he popped up to left field. “When I saw Albie Pearson catch it, all I could think was, ‘There it is, I just won my 20th game.’ It was a great feeling.”

Chance’s final ERA of 1.65 was the lowest in the AL since Spud Chandler of the Yankees compiled a 1.64 mark in 1943. Prior to that, one had to go back to the 1.49 turned in by “Big Train” Johnson in 1919. Against the AL-pennant winning Yankees of 1964, Chance held them to a remarkable one run in 50 innings for a 0.18 ERA. The only tally they managed to get across the plate came when Mickey Mantle hit a home run, one of just seven Chance surrendered all season. “Dean had one of the best seasons in baseball history,” said Bob Kase, a clubhouse boy for the Angels when Chance played, who is now a sports promoter. “If it wasn’t for injuries, Dean would be in the Hall of Fame,” continued Kase, reached by phone in California. “He went on to play for the Twins, Indians and Mets and was only 30-years-old when he quit playing.”

Chance found out that he had won the Cy Young Award shortly after the season was over in a phone call from the Major League offices. In those days there were no national TV teleconferences for such events, but Chance remembered being invited to Cleveland to appear on “The Merv Griffin Show.” In January, 1965, Wooster attorney Hank Critchfield coordinated a Dean Chance banquet to honor the local hero at Northwestern High School. A star-studded cast of local and national sports personalities turned out to honor Chance. Local businessman Tug Maibach said at the time, “This is the biggest thing that’s ever happened to Wayne County.”

A great place to live – After his baseball days Chance worked in the carnival business for several years and has been involved in the boxing scene since promoting Earnie Shavers in the 1970s. Chance, who was divorced in 1971, has one son, Brett. Chance once walked in the elite social circles of Los Angeles, pairing with hard-living teammate Bo Belinsky and hanging out with Hollywood stars. Chance still travels the country on a regular basis in his role as president of the International Boxing Association, but he said there’s no place he would rather call home than Wayne County.

“It’s a great place to live,” Chance said. “When you see the people, they remember the basketball teams we had (in high school) and the old stories. I’m among real friends here.” Chance is a common sight at area basketball or softball games, but the next day might fly out to Las Vegas for a boxing title fight. And wherever Chance goes, it’s almost certain someone will see him and think of the Cy Young Award he won.