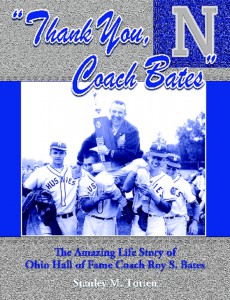 When those words were spoken by Isiah Thomas on national television after leading Indiana past North Carolina to win the 1981 NCAA basketball championship, most viewers across the country had no idea who the future NBA great was talking about.

However, it’s a phrase that was uttered countless times over more than seven decades in this area to Roy S. Bates — and the perfect title for a new biography written about the late Wayne County Sports Hall of Famer and area sports legend.

“Thank You, Coach Bates” is a 218-page, 8 1-2×11 book, loaded with nearly 200 pictures that was written by one of the coach’s former players, 1954 Northwestern High School graduate Stan Totten, also a member of the WCSHOF.

The book is being printed by BookMasters in Ashland and will be released at a special luncheon event Saturday, Aug. 13, at Fisher Auditorium, which is located at the Ohio Agricultural Research and Development Center in Wooster. (Pre-order information for the book is available at the end of this article).

Bates packed more living into his 88 years of life before passing away in 2004 than seems possible. He was an athlete, coach, school teacher, summer tour guide, sports official, philanthropist and, as he was best known in later years, radio commentator.

Totten has done a painstakingly thorough job of assembling a vast array of Bates stories with an incredible number of first-hand interviews that go back to his earliest days as an athlete and coach. The author has also included information from newspaper articles, primarily The Daily Record, letters from Bates’ personal library and emails.

“There’s almost no end to the spectrum of things he did,” said Totten, a retired geology professor at Hanover College, Ind., who still lives in that college town. “Even when you look at one area of his life, such as athletics, it’s highly impressive. But when you put it all together it’s truly unbelievable.

“One person who I had proofread the book, who wasn’t from around here, said, ‘I know what his middle initial S stands for: Superman.’ The reviewer added, ‘If it had been a novel, I don’t believe anyone would want to publish it because no one would believe one person could do all the things (Bates) did.'”

Bates’ middle name was actually Sylvester, which is revealed on the first page of the book, along with the fact that the doctor thought he was stillborn when he arrived on this earth Aug. 28, 1916 to parents John and Effie (Nolan) Bates.

It was a breech delivery that resulted in both of Bates’ arms and legs being broken, Totten writes. The doctor set Bates to the side, thinking he wouldn’t make it, and focused his efforts on saving the mother’s life. Once Effie was stabilized, the doctor turned to the newborn and was surprised to see he was still breathing.

Although Bates’ bones healed, his right arm and shoulder were permanently deformed and left him with limited mobility.

That didn’t stop Bates from excelling in sports such as baseball and basketball, and eventually becoming a hall of fame coach.

“Everyone I talked to remembered him having that deformed right arm,” Totten said. “It was really an identifying mark for people who didn’t know him very well.

“Because of that, he worked extra hard at everything he did to stand out for other reasons. He wanted to become as smart as he could and he also became a very good athlete, and of course later coach. It may have been a deformity, but it didn’t stop him from doing the things he wanted to do.”

The book details Bates graduating as Chester’s valedictorian in 1933 and going on to attend The College of Wooster, where he focused on history and psychology. Bates was hired right out of college to teach and coach at Chester in 1937, where he stayed until it merged with Congress and West Salem to form Northwestern in 1951.

Bates’ greatest glory came leading the Huskies, where he became the first Ohio coach to win state titles in baseball (1959) and basketball (1965). He also became the first coach inducted into Ohio halls of fame for both sports.

Dozens of former colleagues and players, including Totten and his brother, Ron, share stories about Bates in the book.

John McClure, who was a starter along with future Cy Young winner Dean Chance on the 1959 Huskies baseball team, is quoted in the book, saying: “I never went to a game or put on a Husky uniform thinking we were going to lose. From the very beginning of Northwestern High School, coach Bates set a standard. Your reason for being in school was to get an education. … When I think of coach Bates, I think of him as a teacher, coach, and most of all, a friend. He had a way of getting you to a level that you didn’t know you were capable of attaining.”

“Thank You, Coach Bates” details there was much more to the story, though.

He was involved in hundreds of athletic contests as a player and official, along with leading about 60 group trips. There were 12 trips for basketball, eight for senior classes and 40 for the NEA (National Education Association) program — to all but Antarctica.

Bates influenced more than just his students and athletes after becoming a sports commentator for Wooster’s WWST-AM radio station, which is now WQKT (104.5-FM) and WKVX (AM-960), in 1948. He continued his affiliation with the local radio station for 53 years and it’s estimated he did more than 14,500 radio shows.

Bates established a scholarship fund in 1993 that bears his name that will carry on his legacy indefinitely. The Roy S. Bates Foundation was started with more than $14,000 of Bates’ own money, largely generated from the sale of his collection of rare books and ivory scrimshaw and his subsequent investment profits from the stock market.

More than 120 student-athletes have received scholarship awards from Bates’ fund, which is now a component of the Wayne County Community Foundation, totaling in excess of $200,000. The book lists every scholarship winner and has photos of them as well, along with more than 60 team photos of squads Bates coached or played on.

Somewhere in that action-packed life, Bates also found time to be a loving husband to Velma, who still lives in their New Pittsburg home, and father to daughters Linda Dye and Peggy Bates.

And Bates even got a taste of big-time sports when he accepted a position as an assistant coach at Indiana University under Orrville native Bobby Knight in the late 1970s. It was a position he held for four years.

Bates continued to volunteer as a basketball coach in various capacities, including a program for selected Wayne County youth at the Northwestern Middle School on Sunday afternoons from 1983 until shortly before his death.

“When you sit back and think about all Bates did, it really is hard to believe a person like that actually existed,” Totten said.

Now, Totten has provided the ultimate “thank you” to coach Bates for all his good deeds by formally gathering his life story into an entertaining, easy to follow collection of anecdotes.

It’s a long-overdue, and very well done tribute to the man who did seem to wear 1,000 hats during his lifetime.