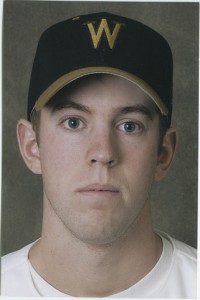 Playing at a small high school and college, Jake Frank had one of the biggest impacts imaginable.

Based just on Frank’s record-setting performances as an All-Ohio baseball and basketball player at Div. III Northwestern High, he would have made a strong case for induction into the WCSHOF after his graduation in 2001.

However, Frank went on to rank as one of the greatest baseball players in the storied history of The College of Wooster and even all of Div. III to cement his spot as a first-ballot honoree into the WCSHOF.

Frank showed up at The COW, won the job as the starting third baseman as a freshman in 2002 and never stopped hitting, while also continuing to improve defensively under coach Tim Pettorini (2006 WCSHOF inductee).

Frank ranks 11th in Div. III history in runs, 13th in RBIs and 20th in hits and was named to the D3baseball.com All-Decade First-Team for the 2000s.

More importantly to Frank, Wooster won the NCAC title three times during his career and placed third in the Div. III World Series in 2005. Frank batted .401 during that memorable senior year, ripping 10 home runs and 58 RBI.

Frank played in the Ohio High School Basketball Coaches Association North-South All-Star Game and also was named MVP of the Berkey Classic that showcases Wayne County’s top seniors. He averaged 23.7 points a game and 10.9 rebounds as a senior. He was named on The Daily Record’s All-2000s first team, as well as the 1994-2004 WCAL All-Decade team in conjunction with the 50th anniversary of the league.

He made an even bigger impact in baseball, still ranking second in state history in career hits (191) and fifth in career batting average (.550). Coach Scott St. Clair called Frank the best pure hitter he’s ever seen and the slugger proved that by hitting safely in 96 of 106 career high school games.