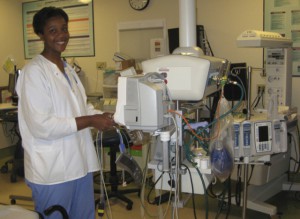 Stacie Howard-Carpenter lettered in four different sports while at Orrville High from 1986-90, but basketball is the one that took her to high levels, and into the WCSHOF.

As a sophomore at OHS, Howard-Carpenter lettered in track; switching to softball in the spring as a junior. She was also accomplished in three years of volleyball, playing on Regional-qualifiers as a sophomore and junior, and then earning Honorable Mention All-Ohio status as a senior.

Howard-Carpenter’s impact in basketball was immediate, starting with All-Conference First-team honors as a freshman, repeating that the next two seasons. As a sophomore averaging 19.9 points, she also was Honorable Mention All-Inland District.

Continuing to progress, Howard-Carpenter became one of Ohio’s best players by her junior year, which saw her average 17.8 points and score a school-record 40 points in a single game. As a senior, she averaged 21.7 points, and seven rebounds a game to earn selection as Division III Co-Player of the Year and to the North-South All-Star game.

She also earned a full ride to Ohio State, where she garnered an additional four letters. After getting valuable minutes her first two seasons, Howard-Carpenter averaged eight points and three rebounds as the starting center for the Lady Buckeyes, who shared the Big Ten title and advanced to the National title game against Cheryl Swoopes and Texas Tech. as a senior, Howard-Carpenter was an OSU co-captain, and she received her Degree in Nursing in 1995. She is scheduled to graduate this year with a Master’s Degree in Health Administration.