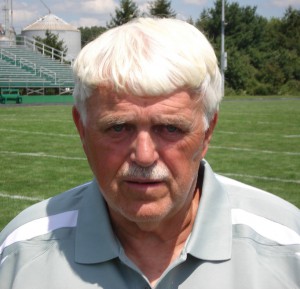 Keith Schrock has helped put the foot in football at Smithville High School. And he’s placed the school’s track team in the fast lane.

Before he entered SHS at the dawn of the 1960’s the Smithies had never won the Wayne County League championship. And after Schrock the All-District, All-League, fullback graduated-a WCL title came the next year- they endured an 18-year drought before winning another championship.

In his 19 years at the helm, his Smithies have won eight conference championships and he has compiled an overall record of 118-74-3.

More important than individual honor to Schrock, however, is that Smithville has qualified for the State playoffs three times.

The Smithies were the first Wayne County Athletic League team to reach the playoffs, back in 1984. They were also the first squad to do it twice, in 1990, and they were the first to pull off the hat trick when they accomplished it again in 1994.

Those accomplishments have earned Schrock eight WCAL Coach of the Year awards, an All-Inlands District COY honor and State runner-up selection as COY.

Perhaps the one statistic that tell the story best about Schrock’s coaching abilities is that in his 28 years in track, he has sent a representative to the State meet in Columbus in 27 of these seasons.

“I never looked at one sport being more important than the other.” Schrock has said about wearing two coaching hats. “In football season, football is most important, in track season, track’s more important.”

A graduate of Ohio State University, Schrock, and his wife, Susan, also a teacher, have three daughters and reside in Smithville.

Schrock’s first date with the WCSHOF came in 1994 when he was Kolic’s presenter. Now it’s his turn to be inducted.

“Keith’s commitment to his teams and his athletes is outstanding,” said Bev Crafton, a WCSHOF Board of Trustee member and a longtime co-worker with Schrock as a teacher at SHS. “His dedication to the students at Smithville High School is legendary.”

So are Schrock’s accomplishments.