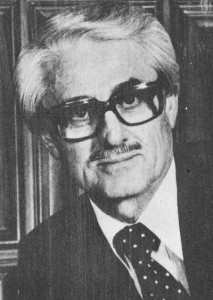 Kenneth R. Miller has been associated with sports all of his life on at least a part time basis. In high school he lettered in basketball and baseball, while playing softball during the summers. In 1944 he managed the Big Prairie softball team. From 1944 to 1948 he played Knights of Pythias softball and baseball and played on the Shreve Merchants softball team. From 1948 to 1964 he was with the Shreve Merchants team.

The Miller Pipers team is the most well-known, having competed in the ASA and USSSA State, Regional, and National tournaments many times. In 1980 his team came in 17th in the world USSSA tournament. At one point the Pipers had a string of 34 trophies (no finish below 4th) in tournament play.

In 40 years, Miller has played and/or managed over 1200 ball games with over 840 wins, for a 70% winning percentage. Through his sponsorship he has enabled other players and teams to compete in literally thousands of more games. His support of the Little League program and of the Triway Boosters is well-known in the area.

Miller has built and owns a ball field, which many local teams have used over the years. The Cow Palace, a dairy barn he remodeled, includes a basketball court, batting cage, meeting room and kitchen facilities. Ken and his wife, Lois, make this available to youth groups at no charge. The Millers also have distinguished themselves in church activities.