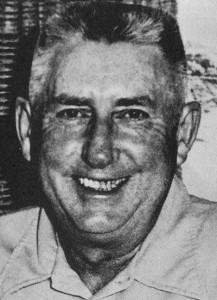 It seems inevitable that sports would play a major role in the life of a man born with the surname of Infield.

And indeed, Ernie Infield has been deeply involved with sports, both on and off the playing fields. During World War II, stationed in the Pacific with the Fourth Marine Division, the young Infield regularly hit balls to the far reaches of the outfield after having organized a regimental league. Playing with and against such major leaguers as Dom DiMaggio, Joe Gordon, Johnny Mize and Schoolboy Rowe. Infield held his own, at least at the plate. Back home in Wayne County, he continued to shine on area softball teams.

His largest contributions to the sports world, however, have come away from the field. After the war, he helped organize the Wayne County Sports League, an independent basketball loop that flourished for years. He also was a founding father of the local Hot Stove League.

In 1951, Infield began writing a Daily record sports column “Ramblin’ Round the Infield” (borrowing the name from a daily report he created to chronicle the Marine baseball frays). Focusing in equal parts on the Wayne County sports scene and national celebrities and issues, the column has been a fixture ever since.

As sports information director (and director of News Services) at The College of Wooster from 1968 to 1977, he turned the operation into one of the country’s finest. A demanding perfectionist, he annually carted off national awards for his sports publications, and set new standards by which Ohio college sports information offices would be judged.

At Wooster College, he formed the “Downtown Rebounders” booster group, and remains responsible for its programs. It is probably the most successful small-college booster group in the nation.

He created the “Bear Award” for the Scots’ basketball team, which honors a player, unheralded at the season’s start, who makes a major contribution and displays courage and character. He also contributes many hours to the College’s “W” Association.

Today, Infield is general editor for the College, working on special research projects and other writing matters.

A successful sales manager before the hectic pace began to take its toll on his health; he remains an astute businessman with more than a few irons in the fire. His connections have enabled him to find jobs for man of the dozens of student-athletes he has taken under his wing.

A leader in church and civic groups, he also finds time to pursue his primary hobbies, bird-hunting and collecting baseball memorabilia.