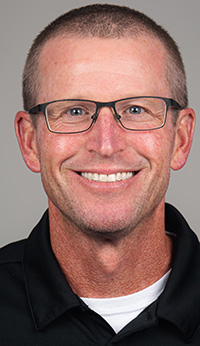 The equipment used by catchers in baseball is often referred to as the “tools of ignorance,” but in the case of Matt Palm, that expression simply did not apply. A three-sport standout at Smithville High School, Palm’s academic and athletic achievements were equally impressive.

As a student, Palm earned academic honors all four years and was named to the National Honor Society. He also served as the organization’s president as a senior. In addition, he was a member of Student Council, the Smithie Marching Band, and the Fellowship of Christian Athletes.

His involvement in athletics began early in the school year and often continued through the last day of classes. In the fall, he won two letters and was twice named team Most Valuable Player in golf. He also earned second-team All-Wayne County Athletic League honors as a senior.

When fall turned to winter, Palm excelled as a member of Smithville’s basketball team. A three-year letter winner, he was named second-team all-league as a junior and then first-team all-league and first-team all-district as a senior. For his career, he averaged 13.8 points per game, while registering 225 assists and 88 steals.

In the spring, Palm took his favorite spot behind the plate, where he earned three letters in baseball and was named first-team all-league as a sophomore, junior, and senior. During his sterling career, the talented catcher hit .430 with six home runs, 64 runs, and 62 runs batted in.

As his high school career came to a close, Palm looked for a college that would satiate his thirst for excellence in the classroom and on the field. As it turned out, he wouldn’t have to go far. The College of Wooster, just a few miles from home, offered exactly what he was looking for — a rigorous academic curriculum and a nationally acclaimed baseball program.

As a newly minted Fighting Scot, Palm wasted no time making his mark. He was named the team’s co-rookie-of-the-year and went on to earn a varsity letter each of his four years with the Scots. He also helped Wooster advance to the NCAA Mideast Regional as a junior and a senior and the Small College World Series as a junior, which he says was the highlight of his athletic career.

A three-time All-North Coast Athletic Conference selection, Palm was named to the regional all-tournament team as a junior and team Most Valuable Player as a senior.

“Winning the regional in 1994 to advance to the Division III World Series is my favorite sports memory,” Palm said. “To accomplish a goal with teammates and coaches was something I will always remember.  We came back through the loser’s bracket to beat undefeated Wittenberg.”

After graduation, Palm knew that baseball was in his blood, so he pursued opportunities to coach at the collegiate level. The first inquiry was answered by another former Fighting Scot — Kevin Howard, who was head coach at Emory University. Palm spent three seasons there, helping the Eagles qualify for three consecutive NCAA regional tournament appearances and post two 30-win seasons. He earned a master’s degree in exercise science at Georgia State University, then spent one season as an assistant coach at Indiana University, helping the Hoosiers post 30 victories.

All of this led up to an offer from Heidelberg University, where Palm would establish himself as one of top NCAA Division III coaches in the nation. During the next 15 years, he would guide the Student Princes to 459 victories, five Ohio Athletic Conference regular-season championships, four OAC tournament titles, six NCAA regional tournament appearances, and one Small College World Series berth. He was named OAC Coach of the Year six times. Currently, he is assistant athletic director and head baseball coach at the University of Findlay.

“It’s my passion, developing young men to be prepared for the challenges of life,” Palm said.

Matt, and his wife of 19 years, Michelle, live in Tiffin with their four children — sons Sam, Nicholas, and Charlie, and daughter Cecilia.