Trustees Laid Plan That Has Endured 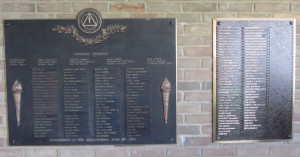 Did you know all of the Wayne Co Sports Hall of Famers are listed on plaques that hang on the wall of the Wayne Co. Administration Building, 428 West Liberty St, Wooster, OH? It’s classic looking plaque, check it out sometime!

As one of the founders of the Wayne County Sports Hall of Fame, Ed Arn had a sense of how important the group’s work was after they inducted the charter class in 1976.

“You never run out of people and stories and tradition,” Arn told The Daily Record after the ceremony. “Really, there is no limit to what can be done.”

Arn, who passed away in March at the age of 97, is now part of the WCSHOF tradition. He was enshrined himself in 1986.

The formation of the WCSHOF, originally known as the Wooster-Wayne County Sports Hall of Fame, was followed closely by The Daily Record in the months leading up to the July 3, 1976 induction program. From naming the first board of trustees, to establishing by-laws and asking residents to nominate deserving individuals, it all set the stage for the announcement and induction of the inaugural class.

The board of trustees who voted for and oversaw the first induction class were Jack Snowbarger (president), Larry Becker and Al Nino (vice presidents), Arn (secretary) and David Turpin (treasurer), along with members Billie J. McFarrren, Ashton Hall, Roman Majerczak, Ward Lehr, Dick Saurer, Bob Glenn, Frank Grenert and Larry Nelson. In addition, a veterans’ committee consisted of Anna Syrios (chairman), Wilbur Berkey, Max Kister, Roy Bates and Mose Hole. Former Daily Record sports writer Bob McComas recalled in a recent interview how exciting it was to work with Arn and the rest of the trustees in the early years for the WCSHOF.

“I still remember Ed Arn as being the most organized and knowledgeable person you could want to oversee the formation of the Hall of Fame,” said McComas, who wrote for The DR from 1973-81 and is now the sports information director at Slippery Rock University. “The man worked countless hours to take care of all the minute details of the induction ceremonies. But he was never too busy to spend time with a young reporter to help him get over the awe he had for inductees and their accomplishments and write a coherent and thorough profile. ”

Working with Ed Arn was like having a living, breathing encyclopedia of Wayne County sports history at your fingertips and is a memory I shall forever treasure.”

Most of the guidelines the founders set up over three decades ago remain in place.