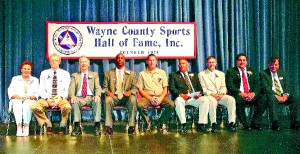 The inductees, their families and friends filed into Wooster High School in separate groups prior to the 18th biennial induction ceremony for the Wayne County Sports Hall of Fame Saturday night.

The athletes and coaches being honored spanned the decades and even generations.

However, stories soon started being shared and common bonds were revealed. It didn’t take long for the approximate 300 people in attendance to feel like they were sitting around a big family dinner table instead of in WHS’ Performing Arts Center.

The Red Riders’ also had 1950s baseball star Stan Becker honored posthumously, with his wife, Sue, accepting from their son, Bob. Another Orrville alum, Larry Smucker, is known by most as the longtime coach of the Wooster Parks & Rec swim program and was presented by his brother, Bruce.

The five Red Rider inductees prompted Wooster alum and inductee John Miller to joke, “Is it just me, or does it feel like we’re in Orrville?” The 1970s basketball star who played for Bowling Green and in the CBA was presented by Charles Booker.

Last but not least, the WCSHOF trustees went into the way-back machine to vote in early 1900s professional baseball pitcher and manager Irvin “Kaiser” Wilhelm, who attended Wooster High. Although Wilhelm lived from 1874-1936, his presenter, historian Mike Vasas, said it was a well-deserved honor for a Wayne County native who left a big mark on baseball.

Throughout the course of the evening several themes were repeated.

The inductees handed out plenty of thank yous, crediting their families, friends, coaches and teammates for helping them find success.

There were lots of stories you’d expect to hear at such a banquet, and also personal anecdotes that helped make it feel more and more like family as the evening progressed.

Ray, who caught the game-winning touchdown pass for Jim Tressel’s Youngstown State team in the 1997 Div. I-AA championship, had the audience laughing when he told stories of coaches such as Steve Smith and Bob Hardnett running their basketball players into the ground.

“It wasn’t whether you win or lose with coach Hardnett, it’s how much you run,” Ray said with a laugh. “I don’t think Forrest Gump could have kept up with the running he made us do.”

Ray added of the late Steve Smith, “We’d miss a layup and next thing you know he was yelling at us about it and then about people in a war missing a leg. I’m not sure how he got there, but I thought, ‘Next time I’ll just dunk the ball.'”

But Ray said coaches at all levels helped him grow into the family man he is today. He closed his acceptance speech by inviting the audience to sing happy birthday to his daughter, Ayla, who just turned 4.

Stultz and Summers both moved to Orrville around middle-school age and thanked the community and coaches for helping them feel at home right away.

Reflecting on the close-knit bonds in the room, Stultz said, “It feels comfortable to be up here and that’s when I perform best.”

As a freshman and sophomore kicker at Ohio State, Stultz said he lost the “comfortable” feeling he had as a Red Rider.

“I needed to start having fun again,” said Stultz, who closed out his career by graduating as the Buckeyes’ second all-time leading scorer.

Stultz was a soccer player when he moved to Orrville, but kicked a football for the first time at Reusser’s house and the rest is history.

Bob Becker shared stories of his father, Stan, trying out as a pitcher for Dizzy Dean and later coaching baseball at Canton McKinley.

Miller and Summers credited basketball for opening up a world of opportunities for them, while stories were told of hard work at the Rupp’s place — on the court and the farm.

O’Hare probably talked the longest, but he gave people their money’s worth with a procession of “here’s another story” tales.

There was the time O’Hare gave his team manager the MVP award after a down year, “but we won the league the next year,” he said.

“I thought I was gonna be at Norwayne for about two years, but next year is going to be 40,” he added. “This is a great area to live in.”

That’s the way many who have grown up in, or moved to Wayne County feel. Athletics can be a great vehicle for learning, self growth, helping others and entertainment and this area certainly supports its competitors. The stories shared by the inductees re-affirmed that last night.

Aaron Dorksen’s weekly look at area, state and national sports appears on Sundays in The Daily Record. Dorksen can be reached at 330-287-1621 or adorksen@the-daily-record.com