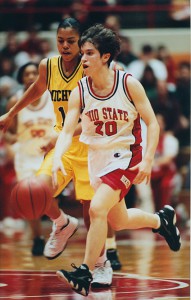 A two-time first-team All-Ohio selection at point guard for the Wooster Generals from 1989-1993.

Marcie Alberts wasn’t blessed with an abundance of physical attributes. What she lacked in stature, she more than compensated for with an unparalleled passion and determination for winning.

And, winning is all Alberts has done during her career.

Alberts, a Wooster High graduate, was the cornerstone of one of the most successful girls basketball chapters in the Wayne County history. She started all four years at point guard, leading Wooster to a 92-7 record.

Despite a severe knee injury during her senior season, Alberts, a 1993 graduate, hit a school-record 267 three-pointer en route to scoring a career-record 1,695 points during her prep career. Twice she was named first-team All-Ohio and was a four-time All-Federal League and All-Northeast Inland District selection.

After guiding the Generals to a state runner-up finish in 1993 and earning Div. I Ohio Player of the Year honors, Alberts took her talents to Ohio State University. As a scholarship player, she collected four letters as a Buckeye, including three as a starter. She was the captain and team MVP for the 1996-97 season and finished her career as the Buckeyes’ all-time leader with 210 three points. She also won a national 3-point contest during the NCAA Final Four in 1997 and went on to play professionally with the Cleveland Rockers of the WNBA.

Alberts, who served as a graduate assistant at the University of Toledo, has stayed close to home as the head girls basketball coach at Orrville High School. In three seasons on the Red Riders bench, she has compiled a 53-16 career record, including the inaugural Ohio Cardinal Conference title.

She currently resides in Orrville with her husband, Rob, and daughter, Jordan. 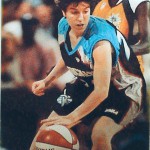