Looking back on 30th anniversary of inaugural WCSHOF ceremony 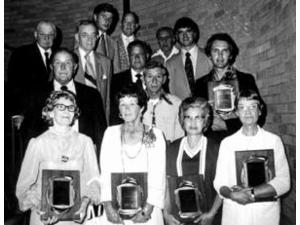 WOOSTER: In what has been referred to many times as one of Wayne County’s finest sports hours, Dick Schafrath was a star among stars on July 3, 1976. That was the night 15 charter members of the Wayne County Sports Hall of Fame were inducted during a ceremony loaded with celebrities at The College of Wooster’s Lowry Center.

Dean Chance, one of the members of that inaugural class along with Schafrath, said the former football star’s induction was a highlight of the evening.

“It was like he had two presenters and the rest of us had one,” said a smiling Chance, during an interview this week. “Woody Hayes was the opening speaker and he kept talking about Dick. ‘Dick was the hardest working kid I ever had,’ Woody said. ‘Dick did this and Dick did that.’ “Then, Blanton Collier presented Dick and of course he said a lot more nice things about him, which was great. … I felt really honored to be a part of it. It was a really nice night for all of us.”

And a really hot night, too. So hot that Chance still seems bothered by it after all these years. “They didn’t have air conditioning at the Lowry Center so it was hotter than (heck),” said Chance, a Northwestern graduate, who pitched in the big leagues for 11 seasons and won the 1964 Cy Young Award for the Los Angeles Angels.

The WCSHOF (originally known as the Wooster-Wayne County Sports Hall of Fame) is just 11 days away from celebrating the 30th anniversary of that first induction ceremony. The group will honor its 15th biennial class at a banquet Saturday at Wooster High School, with the nine new members bringing the total number of enshrinees to 162. Schafrath, who was a football star for Wooster High, Ohio State and the Cleveland Browns, recalled an immense amount of pride to be honored as a charter HOFer in Wayne County.

“I was so proud because there were so many good athletes who came before me,” Schafrath said. “To me, I looked at a lot of those guys as my heroes.

“I was actually a little embarrassed to be in the very first class because there were so many deserving people.” Asked if he recalled being lavished with praise by both Ohio State legend Hayes and former Browns coach Collier on the same night, Schafrath replied, “Well, I don’t remember that, but I’m not surprised Dean did. He remembers every little thing like that. “I just remember being so happy that two of my former coaches were there,” said Schafrath, 69, who is living in Columbus this summer as he wraps up work on a college degree at Ohio State. “They had both been such a big part of my life. “I owe a lot of thanks to them, and other people like Paul Brown and Roy Bates. Even though I never played for Roy, I was as close to him as any coach.”

In addition to Hayes and Collier, two other special guests in attendance were Browns HOFer Dante Lavelli and Richard Gallagher, past president of the Pro Football Hall of Fame. The list of deserving stars the original WCSHOF board of trustees voted to honor first along with Chance and Schafrath was a who’s who of area greats from 1899-1976.

Here are some highlights of the other charter inductees:

Bobby Knight (Orrville H.S., Ohio State) had just coached Indiana University to its first college basketball title in his tenure that previous winter. Of course, Knight is still going as a coach all these years later. Knight has 869 career wins through the end of the 2005-06 season, putting him third on the all-time list. The Texas Tech bench boss should pass Adolph Rupp (876) and Dean Smith (879) this coming season.

Former big-league pitcher Denny Galehouse, who hurled for the Browns against the Cardinals in an all-St. Louis 1944 World Series matchup, was a legend from Doylestown High.

Stretching all the way back to the beginning of Wooster High’s organized school sports (1899) was a posthumous induction for Charles Follis, who some claim became the first black professional football player as a member of the Shelby Blues. The WHS football field is named after him.

Frederick “Blackie” Conrad from Wooster was the high school’s first Big Ten athlete and played both football and basketball for Ohio State in the early 1930s.

Daily Record sports writer Gary Wesman covered the induction and called it a night of “contrasts.”

“(The inductees) were from the early days of the century right up to the present,” Wesman wrote. “The accomplishments for which they were voted to the charter class of the HOF were equally varied. They covered the full spectrum of all major (and some not-so-major) sports. “Some earned their fame locally, some nationally. Some were known as performers, some as coaches, some as organizers and behind-the-scenes supporters. Some were combinations of all three.”

It set the stage for the classes to follow, where mixes of athletes, coaches and administrators have continued to be honored. The presenters for the inductees also offered contrasts, ranging from the nationally known Collier; to Follis’ niece, Alyee Follis Larkins, who gave the award to the deceased honoree’s sister-in-law, Mrs. Joe Follis; to a young mayor named Jim Carmichael, who introduced Burnett. Carmichael, the mayor of Shreve at that time, has been a state Rep. (R-Wooster) since 2000.

Although he speaks in public for a living now, Carmichael admitted to having some butterflies addressing the approximate 250 guests and 15 all-time greats back in 1976.

“How do I say this? I was kind of shy being around all those big names,” admitted Carmichael, who’s contributed to the WCSHOF as a trustee for about the last 15 years. “Guys like Bobby Knight, Dick Schafrath, Miles Beeler, Dean Chance, they had a whole tribe of them that night. It was really exciting.”

It was no doubt worth the extra sweat for those in attendance on that sweltering July night. History was made and a group that’s still going strong today officially laid down its foundation. Many athletes have come and gone since, but the WCSHOF’s “Class of ’76” will never be forgotten.

I just ran across this article when researching the Wooster High School HOF in Reno Nevada. My son is a member of that HOF [36-0 and 3 state championships in football] and his great grandfather Pat Burnett and uncle Jim Carmichael are mentioned above. My twin sons were in attendance in 1976 and we have pictures of them on the laps of Woody and Bobby Knight. I personally attended Triway High School [class of 1965] as a 3 sport athlete then played college football at Adams State College in Colorado. Later in my career I was the Executive Director of the Nevada Interscholastic Activities Association and was good friends with Clair Muscaro who held the same position in Ohio. Still proud of my northeastern Ohio roots!
Jerry Hughes