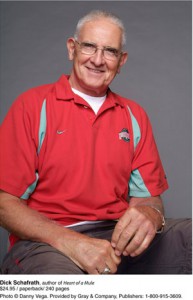 Dick Schafrath starred in three sports at Wooster High School, and then moved on to Ohio State where he captained the football team. He continued as a standout tackle for 13 years with the Cleveland Browns. During that span he made All-Pro four seasons, played in the Pro Bowl seven times and was a member of the 1964 championship team. Recently, he returned to the gridiron as an assistant coach for the Washington Redskins.