Bobby Knight Gym is official Plus more on ‘The General’

A few thoughts from the week in sports …

“A Night with Knight” lasted a little over 1 1/2 hours at Orrville High School last Sunday evening.

Long after most of the 850 fans had heard the legendary Orrville graduate and college basketball’s all-time winningest coach speak and left the building, there was one final thing left to do: Name the gym in his honor.

Orrville officially honored its most famous alum by dedicating “Bobby Knight Gymnasium” in his honor.

“It was supposed to happen during the program, but Bobby started his talk before we could make the presentation,” Orrville athletic director Kent Smith said. “We did it after the fact.

“He told (Orrville superintendent) Jon Ritchie, ‘I’ve never had anything named after me before.’ He was really moved.”

Smith said details still have to be worked out as to where Knight’s name will appear in the gym. Some in Orrville have lobbied to also have the late former Red Rider coaching legend Steve Smith honored by naming the court after him. 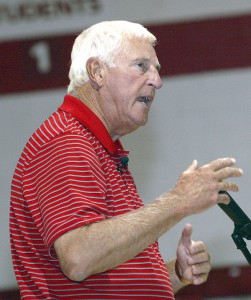 MORE ON KNIGHT — Knight probably could have kept much of the audience interested for twice the duration he spoke. They soaked up the classic collection of stories and one-liners he shared during a return to the school he graduated from in 1958.

However, due to time and space limitations, newspaper reporters can only share so much in a given article.

Here are some “Bonus Bobby” excerpts that weren’t able to be included in Monday’s Daily Record article that featured Knight’s visit, which raised more than $25,000 for the Orrville Area Boys & Girls Club.

* Knight on Mike Krzyzewski, who played for him at Army and has an 868-279 record coaching Army and Duke: “Mike was the leading scorer twice in the Chicago Catholic League in high school, but he was a bad shooter. He got most of his points on layups. I told him before (an NIT game), ‘I want you to handle the ball and play defense.’ Then I asked him, ‘What didn’t I tell you to do?’

Knight is the all-time winningest Div. I-A men’s basketball coach with a combined 902-371 record at Army, Indiana and Texas Tech, but Coach K stands a good chance of beating that win total.

* On Michael Jordan, who Knight coached on the 1984 U.S. gold-medal winning basketball team: “There’s never been a better team player than Jordan. He was tough and smart. … Jim Brown and Babe Ruth are probably the only others who can compare to Jordan as far as dominating their sports.”

Knight when on to share the story of a halftime speech he made during the gold-medal game. The U.S. had a huge lead and Jordan was playing exceptionally well, but Knight wanted to keep them focused so he decided to get on Jordan for not setting any screens. Jordan got quiet for a minute and then said, “Coach, you said I’m one of the fastest players you’ve coached. I’m setting the screens quicker than you can see them,” Knight said.

* On college basketball’s biggest challenge: Knight said the eligibility standards have to be changed, citing a Kentucky starting five last year in which most, or all of them, weren’t even going to class in the second semester.

Knight said NCAA tournament teams should be required to submit eligibility reports, to ensure players have been attending classes and earning passing grades. He doubts NCAA administrators will take that step.

“If the NCAA had planned the Normandy Invasion, we’d have probably landed in Greece,” said Knight, who added that in 42 years of coaching he’s more proud that his teams were among the best in the nation in graduation rates than winning three national titles.

* On coaching philosophy: “I’ve always tried to be someone who, when I tell kids something, I mean it. And I think I learned it (in Orrville).”

* On best line ever by an official: Knight has many fond memories of playing fastpich softball at Orr Park and recalled a long ball he hit down the left-field line that went over the fence and even the light pole. Danny Weaver was coaching the opposing team and complained it was a foul ball.

“The umpire, Ernie Demlow, told Danny, ‘Any man who hits it that far, it’s a home run — fair or foul. Touch ’em all,'” Knight recalled.