A fitting tribute: Memorial service for Bates held in same gym where he once coached 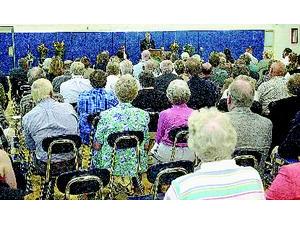 WEST SALEM – Roy Bates always liked to get the last word in. And the first and middle ones, too.

When a good ear was really needed, though, he could also be a good listener. If he was listening in from above as most believed Monday morning, the old coach and radio commentator would have liked what he heard.

Bates, who died Wednesday at the age of 88, was remembered Monday by several hundred people who came out to pay their respects to him during a memorial service at Northwestern Middle School. It was the same gym Bates once coached in as a legendary leader for the Huskies and where he still worked with a dozen or so youngsters on Sundays up until this past spring. Award-winning sports writer and author Terry Pluto of Akron gave the eulogy.

Bates actually preplanned many of the details for his own memorial, including naming longtime friend Pluto as the speaker he desired. Pluto told the audience he was honored to receive such an invitation, even if he knew he was the second choice.

“Who would Roy want most to give the speech here?” Pluto asked. “Roy would probably want to give his own speech. But he can’t and I’m here.” During his talk Pluto asked all the people who Bates had influenced as players, fellow coaches or through the Bates Foundation banquet to stand. With several dozen proud men and women, boys and girls, on their feet, Pluto said, “The trophies that Roy left that matter most are not in a case somewhere, they’re not his won-loss record. His trophies are you people standing and the rest of the people in this room.” Early on in the eulogy, a cellphone rang and Pluto joked that it was probably Bates calling in to correct something he had just said. “He loved to hear his own voice on the radio, but he could really shut it down and listen when he had to,” Pluto said.

The Rev. Robert Moore was the officiant for the service and closed with Bates’ requests of having the audience sing “Amazing Grace” and by reading Bates’ favorite Irish blessing: “May the road rise up to meet you. May the wind be always at your back. May the sun shine warm upon your face; the rains fall soft upon your fields and until we meet again, may God hold you in the palm of His hand.”

“It was a great service,” Chance said. “You could see in this gym how many people Roy affected.” Bates was on local radio airwaves for more than 50 years and influenced several generations through his commentaries. He did his last broadcast for Ashland’s WNCO-AM on Sept. 3.

What many people may not have realized about Bates was that he also continued coaching young people practically until the end. On Sundays in the NMS gym Bates regularly worked with groups of young people. They ranged from well-known area high school or college players, to even youngsters in middle school wanting to learn. Boys and girls alike were welcome.

Ashley Wallace, a freshman at Norwayne High School, was among those in attendance Monday who had recently been coached by Bates. “I’m honored that I actually got to meet him and learn from him,” Wallace said. “I sat with about 10 other kids today right in the bleachers where he used to talk to us. He’d give us a talk for 15 minutes or so about life in general and then teach us basketball.”

Nate Gaubatz, a former standout basketball player for Northwestern and The College of Wooster, said Bates was one of the greatest influences in his life. “I started working with him in eighth grade,” said Gaubatz, now a teacher and coach in the Cloverleaf district.

“He would talk to me about basketball, life and how to handle different situations.” A man in his 80s obviously has a great amount of experience to offer, but could he still be a helpful coach when it came to teaching actual basketball skills?

“You bet,” Gaubatz said. “While he talked to you he’d watch you shoot. He could tell what you were doing wrong in five minutes and help you. “He was great. They’ll never be another like him.”

Not even Bates himself would want to argue with that.

i would listen to Roy & john Myers driving home from Massillon, Ohio. enjoyed immensely, i retired 12 plus yrs ago. Always wondered what become of them?