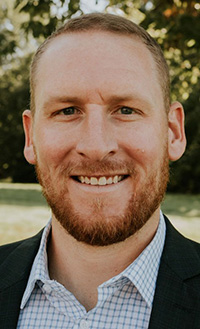 There’s a long line of two-way greats in the tradition-rich football program at Orrville High, and 2005 OHS grad Tommy Brenner certainly has a spot near the very top.

Catching passes from WCSHOF quarterback Tim Hiller (2014 inductee), Brenner set Orrville’s career record for receiving yardage. He also has the most receiving yards in a single game with 240 and was named a first-team All-Ohioan in 2004 after averaging 98 receiving yards a game.

On the other side of the ball, Brenner averaged double-digit tackles per game as a senior en route to being named the Ohio Cardinal Conference Defensive Player of the Year, and for good measure, he also averaged 41.3 yards as the Red Rider punter.

He was just as good on the basketball court, where he was a four-year starter at Orrville and was a two-time second-team all-conference performer. Then, as a senior, he went out for track for the first time and lettered while competing in the 400, a pair of sprint relays, and the discus.

“As intense as the Orrville vs. Wooster rivalry as well as other county rivalries were and continue to be today, some of my best friends post high school ended up being my rivals from across Wayne County,” Brenner recalled. “I’ve always appreciated and respected the Wayne County connections.”

Making the short trip west to Ashland University, Brenner excelled as a four-year letterman as a safety and then linebacker for the AU football team, starting in 2005 when he was named the Eagles’ top freshman.

That set the stage for the last, and best, season of his AU career. He led the Eagles in tackles with a whopping 126 — 70 of the solo variety — and had 17 tackles for loss, a half-dozen sacks, and four interceptions, including one he took back for a touchdown. In the first playoff win in school history, Brenner had 11 tackles and a fumble recovery, and he was a second-team All-Great Lakes Intercollegiate Athletic Conference selection.

In addition to his abilities on both sides of the ball, you have to add a third prong to Brenner’s success — his leadership. He served as a captain of the Red Riders as a senior, then filled the same role collegiately at Ashland University. For good measure, the multi-sport standout captained the OHS basketball teams as both a junior and senior.

A three-time member of the All-GLIAC Academic Team while a finance major at Ashland, Brenner works today as a Business Risk Advisor for the Hummel Group in Wadsworth.

Married to Hilary (Ward) Brenner for 14 years and the father of three (Anna, Wesson and Maryn, he lives in Marshallville.