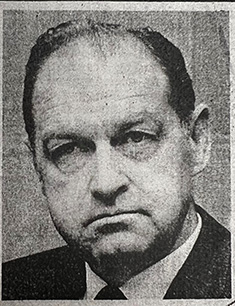 The late Paul Dodez didn’t have one shining moment like some high school athletes, who win a state championship as an individual or as part of a team.

However, Dodez did so much for so long for Wayne County athletics that he’s finally getting his just due as a Wayne County Sports Hall of Fame inductee.

After first being nominated in 1979, and 38 years after his death, Dodez has received his “call to the hall” after being recommended by the WCSHOF Veterans Committee and voted in by the Board of Trustees.

Dodez, who passed away at age 71 in 1984, was a big part of the fabric of the Wayne County sports and education scene for more than four decades. He wore just about every hat possible: athlete, coach, official, teacher, principal, scoutmaster, service organization volunteer and more.

Former Wooster High School principal Paul Ladd wrote in a 1983 letter to the WCSHOF board, “Paul made contributions in a very quiet and effective way and never tried to bring notoriety to himself. I heartily recommend him.”

The late Ernie infield, a 1980 WCSHOF inductee, added a 1983 letter to the WCSHOF: “There are few individuals who have made a more impressive contribution to the Wayne County sports scene than Paul Dodez.”

Dodez graduated from Mount Eaton High School in 1931, where he played on Wayne County League champion teams in basketball and baseball. He started at guard for three years and earned first-team All-WCL honors in 1931.

Next it was on to The College of Wooster, where Dodez played football for the first time. He earned honorable mention honors for the Fighting Scots’ Ohio Conference champion team in 1934.

Dodez’s biggest impact came after graduating from The COW, highlighted by contributions at Wooster High School.

In 1957, Dodez became the Wooster Junior High School principal. He was involved in the planning of Edgewood Junior High, which opened in 1963.

Dodez also was on the board of the Wooster YMCA at the time its facility, which is still in use today, was constructed in 1958.

Somehow, Dodez also had time to work as an OHSAA official from 1948-66, a Troop 66 Scoutmaster and serve on the board of Wooster YMCA at the time the new facility was constructed. He served as the director of Wooster Kiwanis and Wayne County Mental Health Association.

Dodez began his career by teaching and coaching at Mount Eaton (1935-37) and then Congress (1937-40). He coached the Mount Eaton baseball team to a WCL championship and started the football program at Congress.

In 1940, Dodez became principal at Dalton High School, where he also taught math, science and Latin. In 1943, he received his master’s degree from Ohio State and went to Salem to teach and coach for a short time.

Dodez and his wife, Ruth Dodez Collier, who died in 2004 at age 87, were active members of First Presbyterian Church in Wooster. Paul took early retirement in 1973 and they moved to Albany, Georgia, where he remained active in community affairs.

The couple had three children. Lynn Dodez and Jane Deepler are both deceased and a daughter, Paula Moeckel was last known to be living in Germany. Numerous attempts to reach one of Dodez’s surviving relatives were unsuccessful.