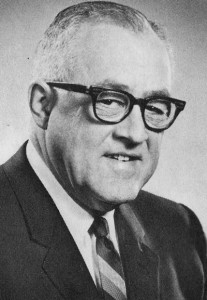 W. Harrold Johnson is a man who has dedicated a major portion of his life to the furtherance of sports for young people. He played and earned letters in baseball and football at Dalton High and was basketball manager.

At Bluffton College, Johnson again earned letters in baseball and football. He also was named the International News Service starting guard on the All-Northwest Ohio All-Star team. Later he played center on the semi-professional Pennsy Billiards football team in Canton.

After teaching one year in Dalton, Harrold came to Orrville to teach and coach. Under head coach Harry Strobel, he helped guide the 1940 football team to an undefeated season. He was in the Orrville system six years when, in 1942 he took a position with the Will-Burt Company. Johnson worked his way up to Executive Vice-President, his position when he retired a few years ago.

Even though Johnson was a fine competitor as a coach and participant, he is better known in the area for his officiating ability. He officiated basketball and football from 1936 to 1956. In the opinion of the coaches of his time, he was one of the best and was always called upon to do the big or tough games and tournaments because his judgment was respected.

In 1946 Johnson and Don Welsh founded the Wayne County Officials Association (WCOA), a group which still meets regularly to discuss rules changes and to assist young persons to become accredited officials. He was awarded honorary life membership in the WCOA in 1954 for his efforts in the organization.

Johnson managed the Orr Park facilities and recreation programs for several years in the late 40s and early 50s. During this time, swimming exhibitions were held at Orr Pool under his direction, drawing crowds of over 1,000 some evenings. He also gave impetus to what is now the City Slo-Pitch League. During any summer, over 450 games of softball are played on Orr Park’s two fields.