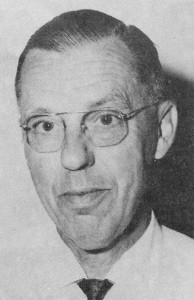 Don Welsh has taught school for 47 years. He is probably as well known, however, as an official as he is as a teacher. The list of accomplishments this man has made is almost endless. He started by lettering in track at Wooster High School.

Welsh became registered by the Ohio High School athletic Association to officiate basketball and football in 1931. He held this registration as an active official until 1970, a period of 39 years. In this time he worked football games (high school and college) for 37 years. For 24 years he also officiated basketball for high school and colleges. He was athletic director at Wooster High for 14 years.

Welsh served as commissioner of the Cardinal Conference from 1963 to 1976. He has been a member of the Ohio High School Commissioners Association, serving as president from 1973 to 1976.

By being a teacher, guidance counselor, coach and official, Don Welsh has contributed much to the youth so that they can better themselves academically and athletically.

The gymnasium at Wooster High School was rededicated in the name of Donald Welsh in 1978.