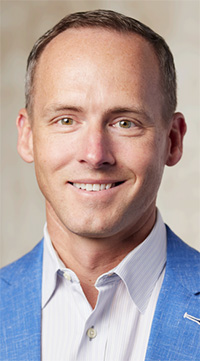 To characterize Jared Zwick’s accomplishments as prodigious would not do justice to his superlative level of achievement — both academically and athletically.

A standout in football, basketball, and track at Orrville High School, Zwick earned a full scholarship to play football at Youngstown State University. After graduating from YSU, he attended dental school at The Ohio State University. He then attended a one-year general residency in Cleveland before returning to Columbus to enter into a three-year orthodontics program at Ohio State From there, he went into private orthodontic practice with offices initially in Dublin and Upper Arlington, and now leads clinical business development of mergers and acquisitions for Smile Doctors.

His early athletic career was shaped at the Boys & Girls Club in Orrville and eventually blossomed across the street, where he launched a fabulous career at Orrville High School.

In football, he was a three-year starter and letter winner at quarterback for the Red Riders. As a junior, he led his team to a state runner-up finish in Division IV. As a senior, he guided Orrville to a perfect regular season before losing in the state semifinals. That year, he threw for 2,238 yards and 28 touchdowns, and was named first-team all-district and second-team All-Ohio.

In basketball, Zwick played for three years, but a shoulder injury forced him to miss most of his senior season. He made it back for the state championship game, which the Riders won for the second year in a row, giving them back-to-back titles in 1995 and 1996.

In track, Zwick was a three-year letter winner, running both the 100- and 200-meter dash as well as the 400- and 1,600-meter relays. By the time he was a senior, he ran all four events in every meet and posted the best times in Wayne County in three of those four events: the 100-meter dash (11.1), the 400-meter relay (43.4), and the 1,600-meter relay (3:25.5). That same year, his 400-meter relay team placed third at the Ohio High School Track and Field Championships, missing second in a photo finish. Numerous honors followed, including his selection as an All-Ohio Track and Field Athlete and an Academic All-Ohioan. In addition, he received the Orrville High School Coaches Award at the conclusion of his senior year.

Those credentials would certainly be sufficient to land Zwick in the Wayne County Sports Hall of Fame, but his collegiate career at Youngstown State sealed the deal. He was a four-year letter winner for the Penguins who captured the Division I AA National Championship in 1997 and finished as runner-up in 1999.

Off the field, Zwick was even more impressive. A pre-med major in biology, he made the Dean’s List all four years and was inducted into two academic honor societies — Omicron Delta Kappa and Alpha Epsilon. In addition, he was named a first-team All-Gateway Conference Scholar-Athlete; received a Division I-AA Burger King Football Scholar-Athlete Award in the amount of $10,000, which was donated to the university’s athletic department in his name; and received a Miladore Scholarship as a top scholar-athlete in pre-med. As a senior, he also received an NCAA National Football Foundation Scholar-Athlete Award for post-baccalaureate studies and graduated Cum Laude.

A natural-born leader, Zwick was involved with the Student-Athlete Advisory Committee, the Fellowship of Christian Athletes, and the Big Brother program.

Jared, and his wife, Tamara, live in Dublin with their four children — twin boys, Asher and Jensen (age 11) and two girls, Noa and Teddy (ages 9 and 8).